Have you ever looked at a bag of speciality coffee beans and noticed it saying 100% Arabica coffee? You might not even know what that means. Or, you may be like a lot of other coffee lovers out there and think that’s the only type of coffee bean available.

However, there are over 100 coffee species out there. The four most popular that are widely produced and sold are Arabica, Robusta, and the less common Liberica and Excelsa coffee beans. Today we are going to look at each one and learn what the real difference is. 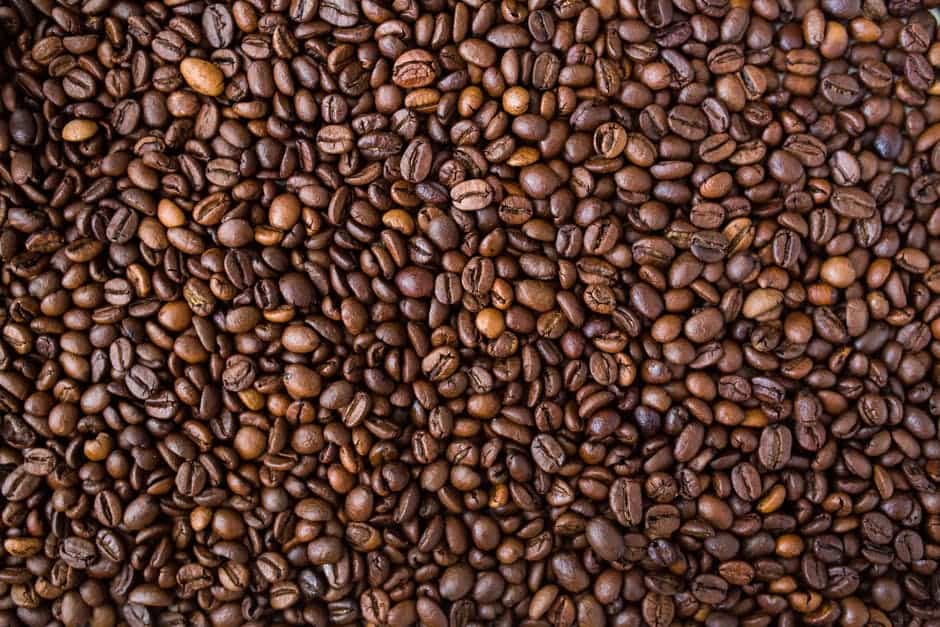 The Coffea Arabica bush is grown all around the world and is the bean that over seventy percent of all coffee is made from.

This bean is super flavourful. Depending on which region it is grown in determines the flavour of the bean. For example, the Sumatra Jagong blend that was included in the Blue Coffee Subscription box is grown in Sumatra and has notes of dark chocolate orange and rose, whilst the Kenya Rioki AA blend grown in Kenya has notes of fig, orange blossom, and butterscotch. 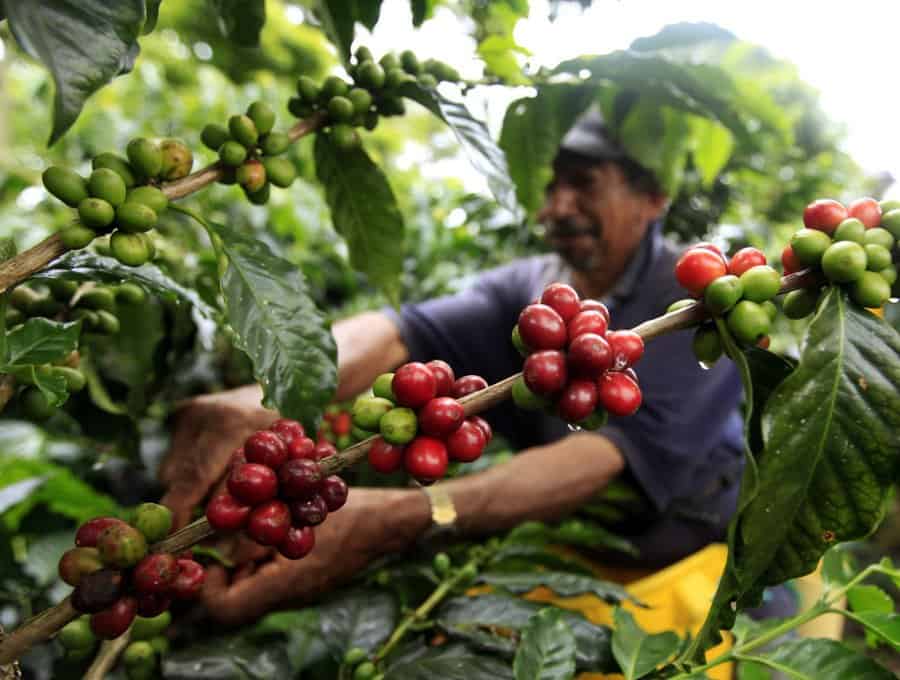 The Arabica coffee bean has a milder flavour and less caffeine than the other coffee beans out there. When you brew this coffee at home, be sure to buy an Arabica coffee that has a full body and lower acidity.

Another note to mention is that this type of coffee bean when brewed is best served hot and does offer a better flavour when used with a pour-over or drip coffee technique.

The quality of the Arabica bean diminishes when served cold or with creamer.

Other popular varietals of Arabica coffee are: Typica, Caturra, Bourbon, and Blue Mountain.

The Robusta beans contain less oil than the Arabic beans which tend to give them a more acidic and bitter taste, which is why this variety is used in coffee drinks like espresso.

The Robusta bean is a less expensive bean than the Arabic bean and is what you will find being used in drinks on supermarket shelves as well. This is due the higher caffeine content, at least fifty percent more than the Arabica bean. 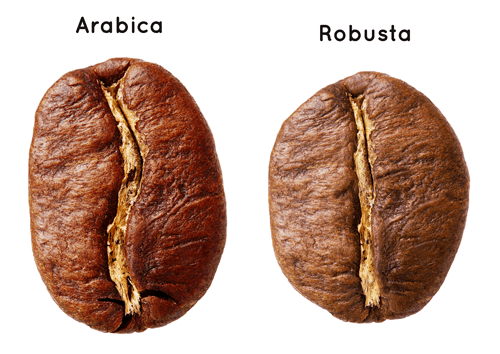 Higher quality Robusta beans have a smooth texture, low acidity, and often have hints of chocolate associated with their flavour profile. One of our favourite Robusta blends is the Myanmar Ngu Shwelli SL34 with notes of plum, green apple, and toffee.

This is a perfect coffee for cream and sugar lovers! A good quality Robusta will not lose flavour when adding milk or sugar.

Liberica beans can be pretty big in size, and have the unique characteristic in which many Liberica beans are asymmetric – one side is “lower” than the other, causing a little “hook” at the bottom of the bean. It is the only bean species in the world with this irregular shape.

Its almond-shaped beans give off an amazing aroma, almost floral and fruity, whilst its flavour is full and slightly smokey. It is an entirely separate species of coffee, with a very distinctive taste profile. 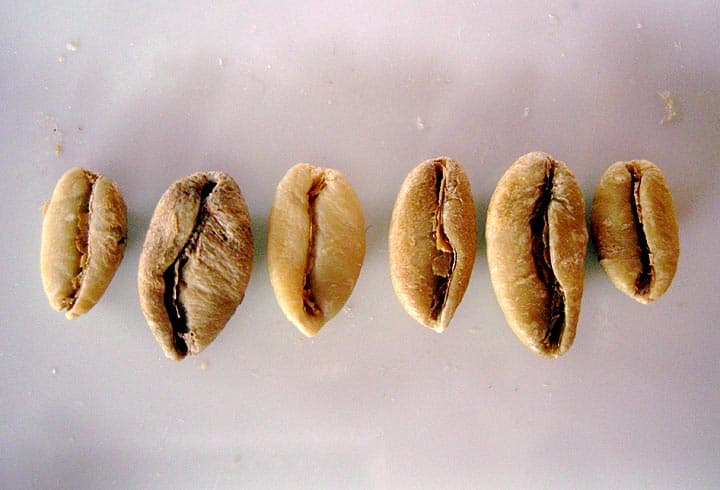 Many people who purchase the Liberica coffee bean uses it to mix with other varieties like Arabica and Robusta, making it add a true wow factor to your morning cup of joe.

Those coffee lovers who have had Liberica coffee say that it is unlike any coffee they have ever tasted- with many saying it does not even taste like coffee, stating that it tastes very woody in flavour.

The Excelsa coffee bean has been recently re-classified as a member of the Liberica family. However, taking a closer look at this variety, you can see that the two flavours couldn’t be any more different.

Excelsa grows mostly in Southeast Asia and accounts for a mere 7% of the world’s coffee circulation. It is largely used in blends in order to give the coffee an extra boost of flavour and complexity, better affecting the middle and back palate. 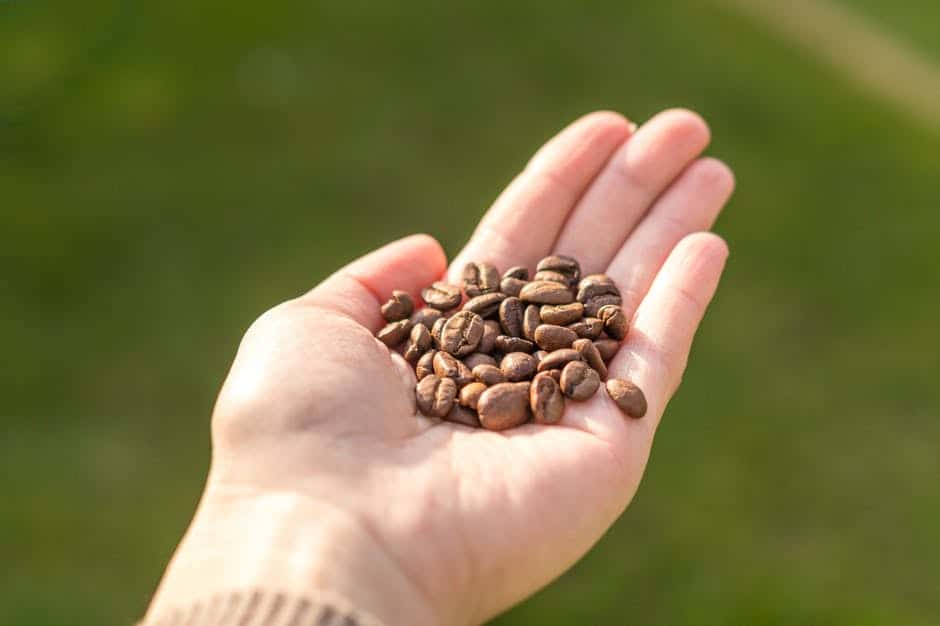 Excelsa is said to possess a tart and fruity body- which are flavours reminiscent of a light roast- that also somehow has dark roasted notes.

Why You Need to Know the Difference in Coffee Beans

If you are a true coffee connoisseur, you will want to note the difference in the types of coffee beans and their flavours. For this, we suggest taking notes as you try different speciality coffees.

Each month in our Blue Coffee Box subscription, we always offer four types of coffees. As you get these in, keep a notebook of the flavour profiles you taste and which happen to be your favourite. This way, down the road, when you need more coffee and run out, you will know which flavour to purchase.

Developing a sense of taste is really about developing a vocabulary. If you clearly taste the apple in a coffee you try today, but then don’t pick up on apple again for two months, there could be 30 coffees in between those two experiences.

Not only will you forget details like the region, processing technique, altitude, varietal, and roast profile, but you’ll forget if it was a red apple or a green if the flavour bordered on pear.

You’ll forget if it was paired with other flavours like cinnamon or caramel. Taking notes helps you.

Join the thousands worldwide in our Coffee Lovers Club who receive our best discounts, new videos, coffee tips, and recipe ideas every week