Planning a coffee farm and all the processing that goes with it requires a huge investment of financial and human resources.

So, when Atkinsons Coffee Roasters heard that an enlightened group of individuals was looking for funds in a Kickstarter campaign for a new coffee producing initiative in Myanmar they were intrigued enough to invest.

All this last year they have watched in horror on the global news media as the shocking events unfolded in the neighbouring province to their highland coffee-growing communities.

The new producers in this fledgling coffee initiative need their continued support now more than ever.

They have gone for quality over quantity and the flavour of this Kenyan SL34 variety really shines through with notes of sweet stewed plums, green apple, and toffee. 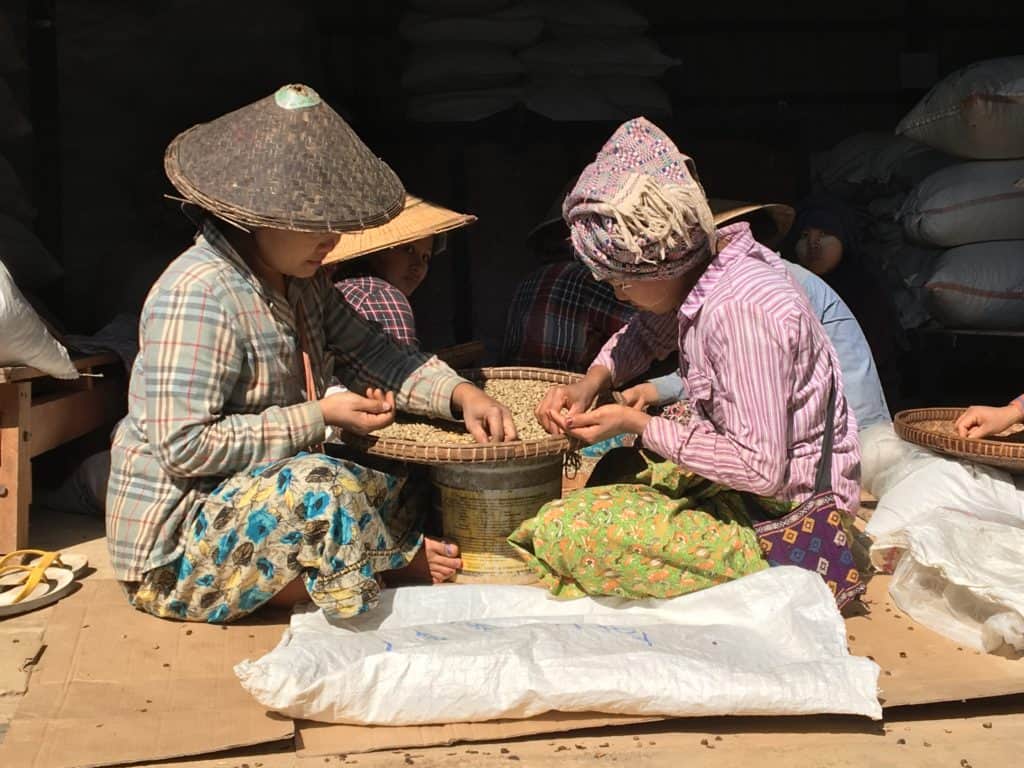 Coffees are hand-picked at peak ripeness and delivered by a truck to the Mandalay Coffee Group for processing within 24 hours.

Once they arrive at MCG they are floated to remove under-ripe cherries then pulped to remove the skins. After pulping they are fermented in water to soften the mucilage and develop sweetness and acidity then the mucilage is removed mechanically and the water is recycled onsite. 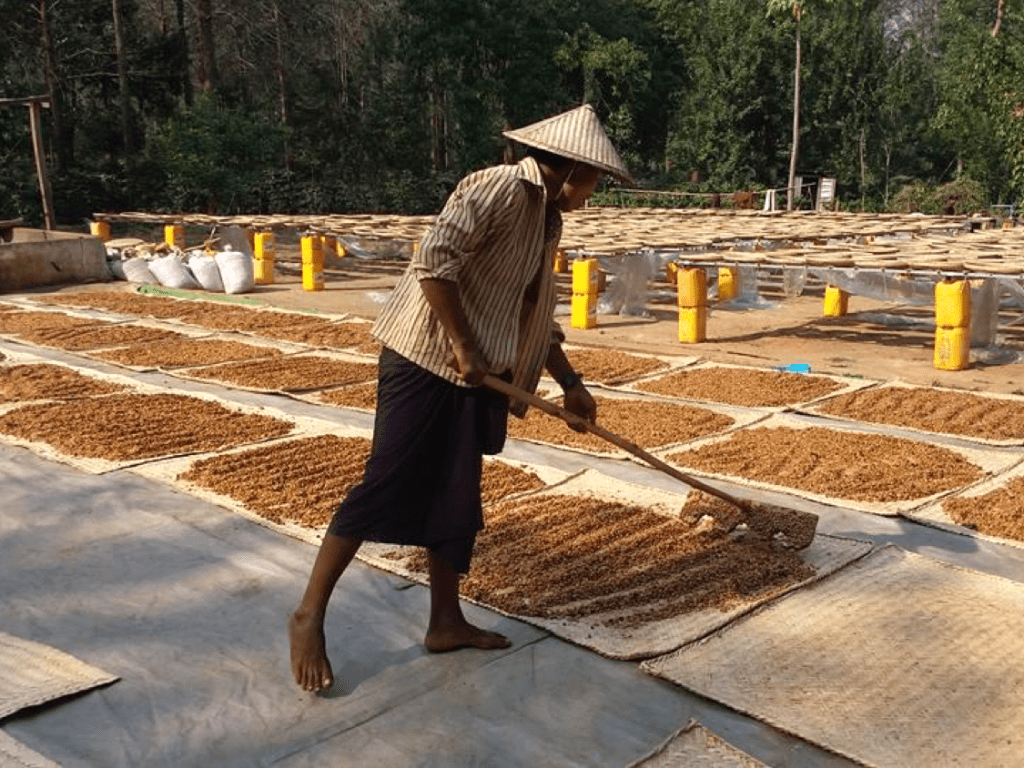 When the mucilage has been removed they are then spread out on patios that are covered in plastic sheets for cleanliness and raked every hour to ensure even drying. Supervisors use moisture meters to check when the coffee is ready to be sent to the warehouse where it is stored in the parchment as this is the best way to preserve freshness.

Although Myanmar is relatively new to most people as a coffee origin, coffee has actually been cultivated here since 1885 after British missionaries planted Robusta seeds brought over from India.

Shortly after this, Arabica was introduced with S795, a Leaf Rust resistant hybrid of Arabica and Liberica from India and the now highly sought after SL34 from Kenya. 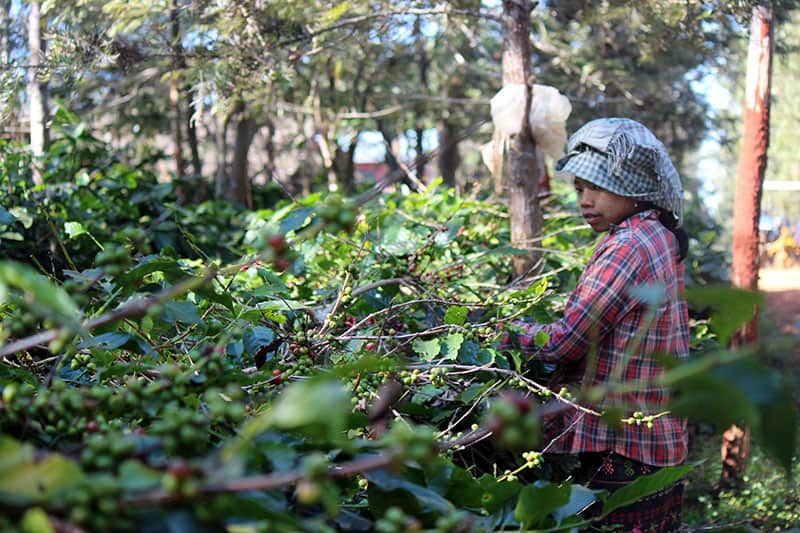 Coffee production in Myanmar plummeted after it was nationalised in the 1960’s, however, in 1997 it was privatised and the government granted funding to producers in an effort to reduce deforestation and the farming of Opium.

In the last 10 years Myanmar’s coffee production has more than doubled, however at 8,000 tonnes a year it is still way down in 35th place in world rankings by volume. Therefore, to make this a more valuable export, farmers are focussing on producing the highest quality speciality grade coffee they can.

Ngu Shwelli is the oldest coffee estate in Mandalay, founded in 1997 by U Kyaw Sein after he had tried growing peas and mining Jade.

Set in the surrounding hills of Pyin Oo Lwin, this scenic landscape is known for its botanical gardens, a sign that the terroir and climate must be good for growing coffee too.

Coffee trees are grown under the shade of Silver Oak and Macadamia trees to help regulate the temperature and not scorch the plants in the midday heat. Usually, after about 5-10 years, the yield of a coffee plant will begin to decrease so most coffee farmers will stump the plants to allow for regrowth and increased yields.

U Kyaw Sein, however, has built his own nursery on the farm so new plants can replace the old ones with a fresh new root stock.

Between their original shop and The Hall café sits their roastery.  They use this area as a productive space, conducive to doing justice to some of the finest coffees around. 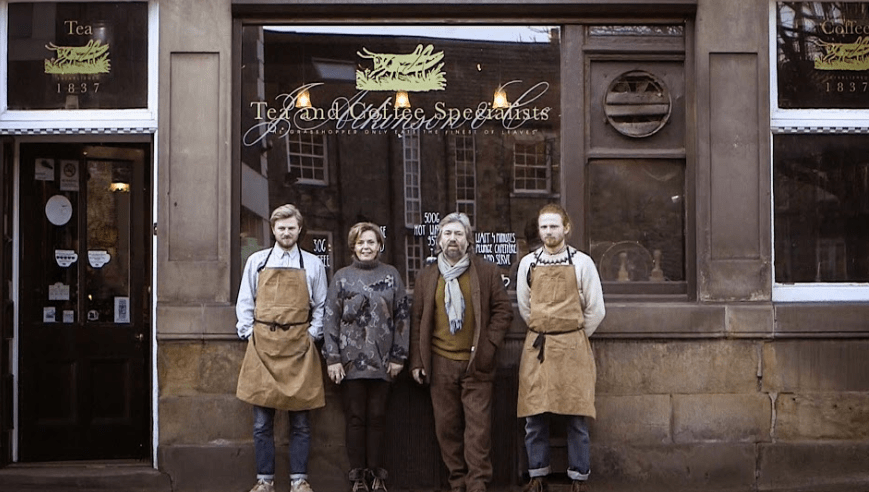 It takes 400 man-hours to produce one pound of beans, and at Atkinsons, they use this incredible statistic in the training of their Baristas.

Every day they roast and cup coffees together, and it is here, in the core of their business, that the majority of their coffee is precision roasted on the Loring Kestrel, one of the greenest roasters on the planet.

They use their vintage, cast iron Whitmees and Unos that adds that extra bit of conduction into the odd batch; it’s a sign of the heritage and innovation behind the company.

To experience full flavoured coffees like the Myanmar Ngu Shwelli SL34 blend, be sure and sign up for a Blue Coffee Box Subscription. Click for more details and to find out how you can get your first box.