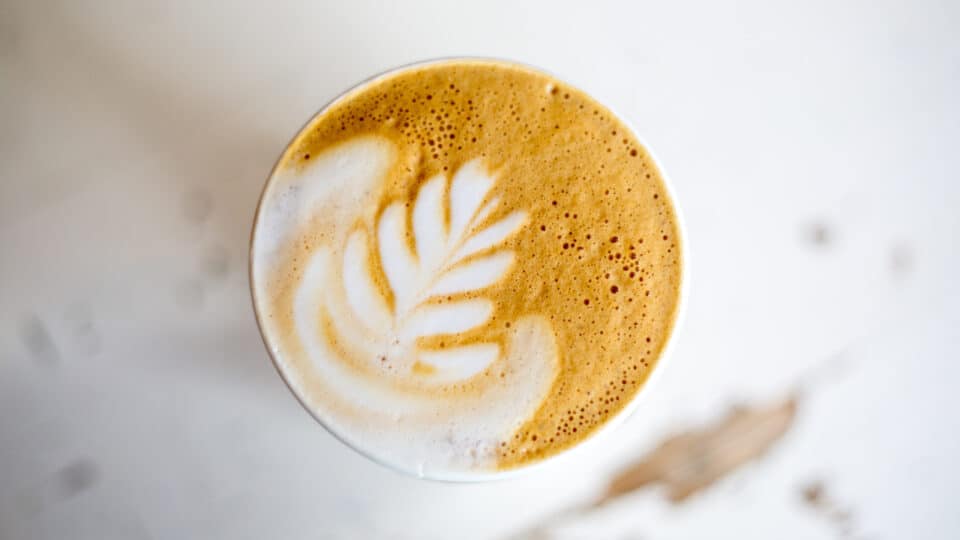 Everybody has a favourite coffee. Whether you stick religiously to a black Americano or prefer to add syrups and creams to create something sweeter, the chances are you have a go-to brew. People also have different habits when it comes to the frequency with which they get their caffeine fix, and we know that more of you than ever are choosing to drink a gourmet brew at home instead of out and about.

The UK’s coffee habits have changed over the years, and here at Blue Coffee Box we’ve been keen to find out exactly how much of a change there has been. So, we’ve taken a deep dive into the most popular coffees in the UK and how coffee shop culture has changed – based on:

Keep reading to find out more about the most commonplace – and the most obscure – coffee trends we’ve found.

How our coffee habits have changed

Pre-pandemic, it was reported that 80% of coffee shop frequenters in the UK visited coffee shops at least once per week to get their coffee fix, with 16% visiting on a daily basis – statistics that have been repeated far and wide ever since. But after a few years of brewing coffee at home, many of us have switched to a less regular habit. 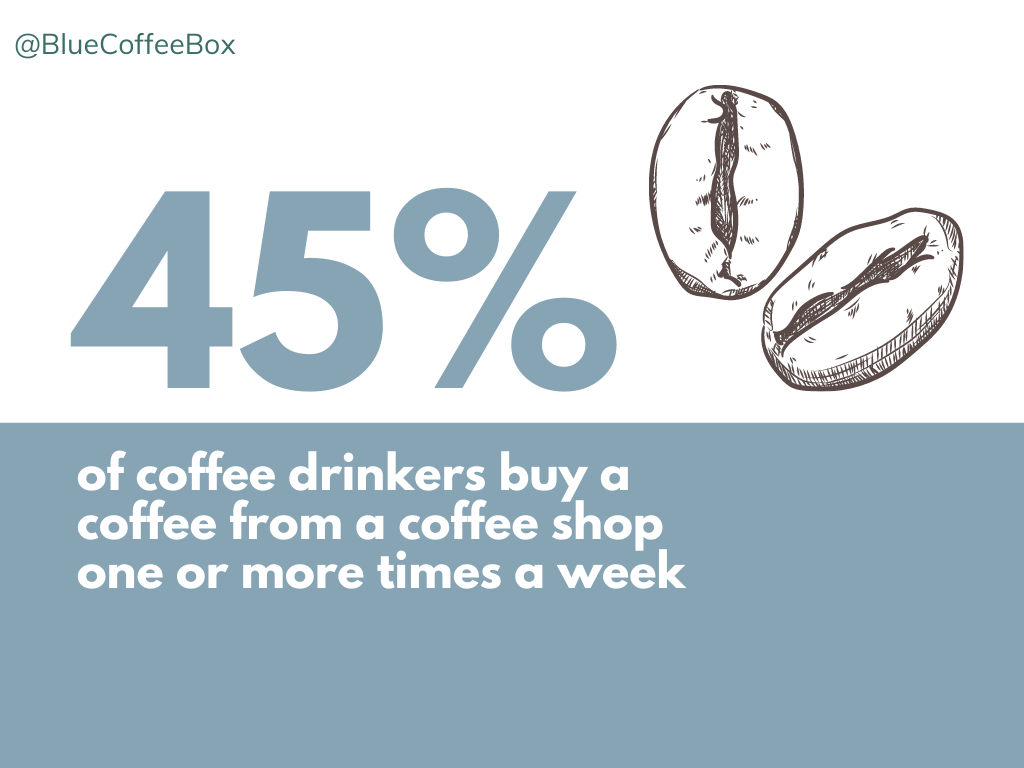 When we surveyed the coffee-loving public to find out how often they buy a coffee shop cuppa now, the frequency reported came out a lot lower, with just 45% of coffee drinkers stating that they head to a coffee shop once per week or more. Just 2.5% told us they go 6-7 times per week – a substantial drop on the 16% previously reported. 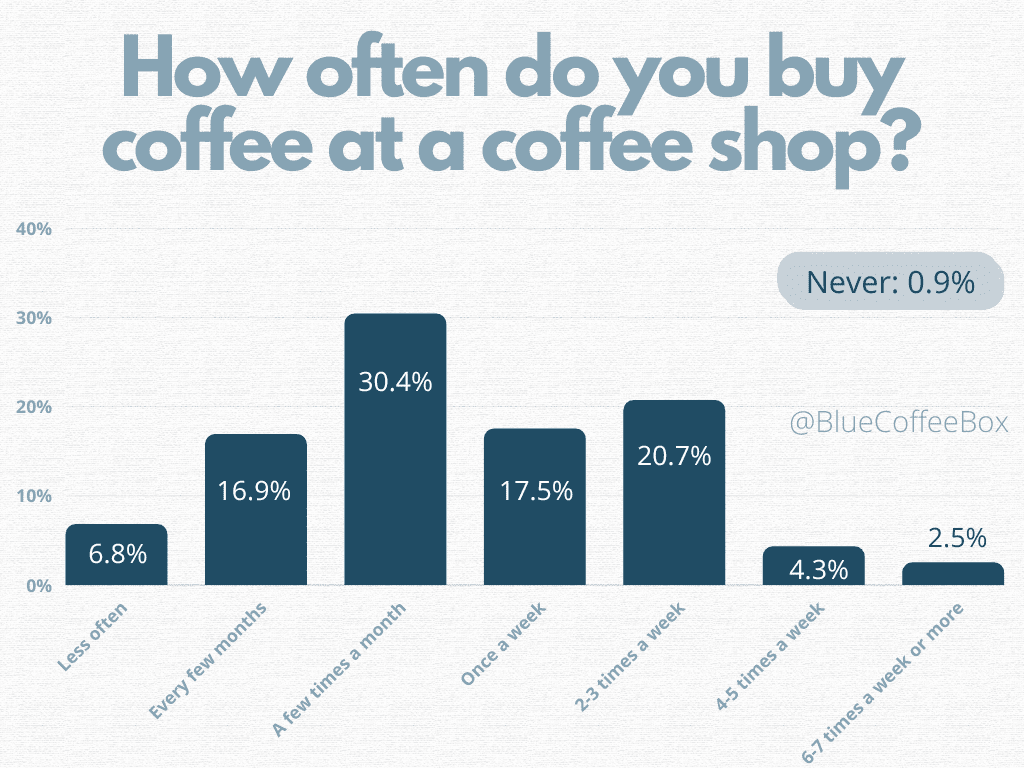 A very small percentage (0.9%) actually stated that they never buy coffee out and about, while others say they visit coffee shops a few times a month or every few months, rather than on a weekly basis. This is likely to be in part due to the number of people who are now permanently working from home or working in a hybrid set-up – estimated to be around 76% of previously office-based workers. Rather than reaching for a coffee to-go, many of us are now firmly in the habit of brewing our own gourmet coffee at home.

Want to know where you can get a great cup of coffee while you’re out and about? Check out our list of The UK’s Top Coffee Hotspots.

The most popular at-home coffee equipment

While cafetieres remain the most popular pick for at-home coffee making, the second-most popular purchase is a coffee grinder. Tools like the AeroPress, moka pot and home espresso machines have grown in popularity as time has gone on, and more than half of the coffee lovers we surveyed (51.5%) told us they now own their own grinder to get freshly ground beans for their beverages, whatever the brewing apparatus choice.

Instant coffee may still be a popular choice on the supermarket shelves, but the evidence suggests that plenty of shoppers would rather opt not just for fresh coffee, but for whole beans, in 2022. 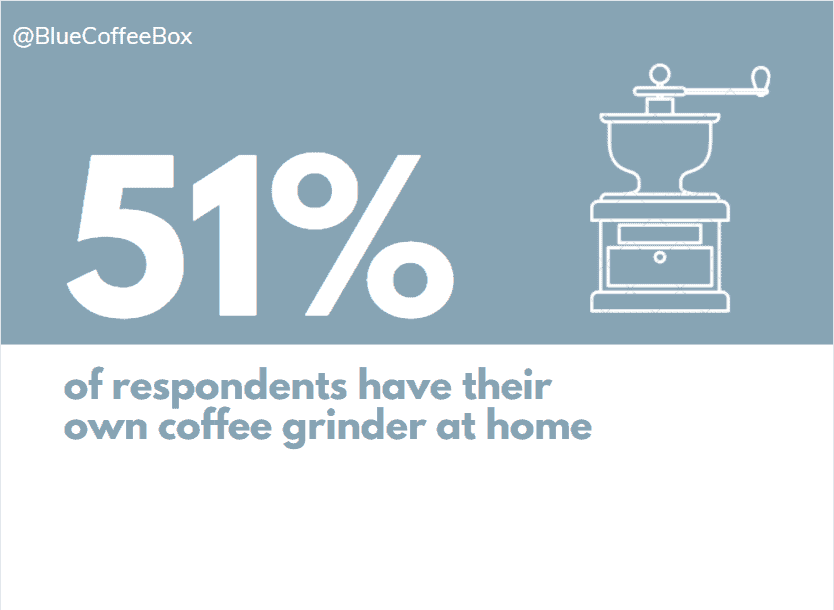 Question: Which, if any, do you use at home? Select all that apply

You can find out more about the four most popular types of coffee beans here, and learn about the important differences between ground coffee and instant coffee here.

The UK’s most popular coffees

Whether you’re drinking at home or out and about, we’ll bet you’ve got a number one style of coffee. Baristas have seen a gradual shift in people’s ordering preferences over time, and previous surveys of the UK’s coffee consumers have found that black coffees were the most popular style (Zagat survey – 2015) before lattes crept into the lead (AO.com survey – 2018).

Question: When you order coffee at a coffee shop, which do you usually order? 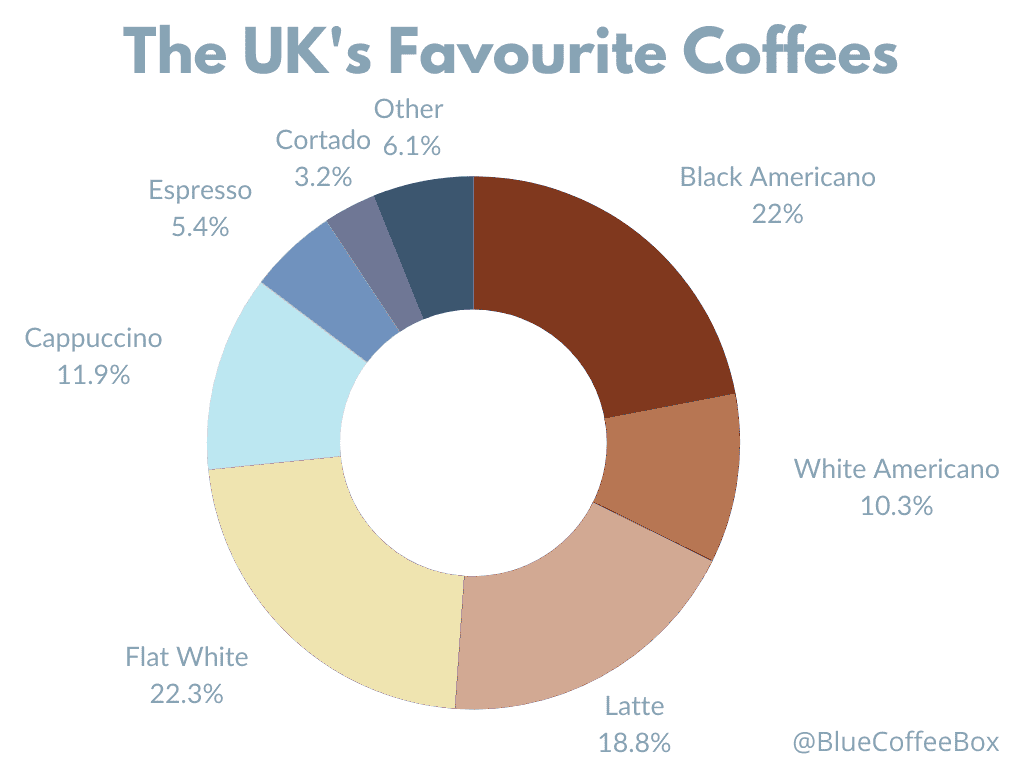 If you’re not quite sure what the difference is between a flat white and a latte, the simplest way to explain it is that it’s all in the milk. Both coffees have the same amount of espresso in them, but flat whites are a stronger, more coffee-heavy option.

What baristas have to say

As well as confirming that our findings on the UK’s most popular coffee trends were accurate, the baristas we’ve spoken to offered insight into some of the more unusual trends that have swept both the nation and the world in recent years.

Speaking from Coffery & Co coffee shop in Devon, barista and manager Tom told us, “Opening our doors only 3 weeks before the first Covid lockdown meant having to find solutions to keep the business running during the following months. We created new drinks to fit with the current trends floating around social media and the internet, one of which was dalgona coffee.”

For those of you reading this who are unfamiliar, dalgona coffee is a drink made by whipping coffee with sugar and hot water until it becomes creamy, then adding it to milk. The term ‘dalgona coffee’ was almost unheard of online until March 2020, when interest briefly skyrocketed from 20 UK searches in February to 90,500 in March and a subsequent 450,000 searches in April, before settling down to around 9,900 searches most months since. 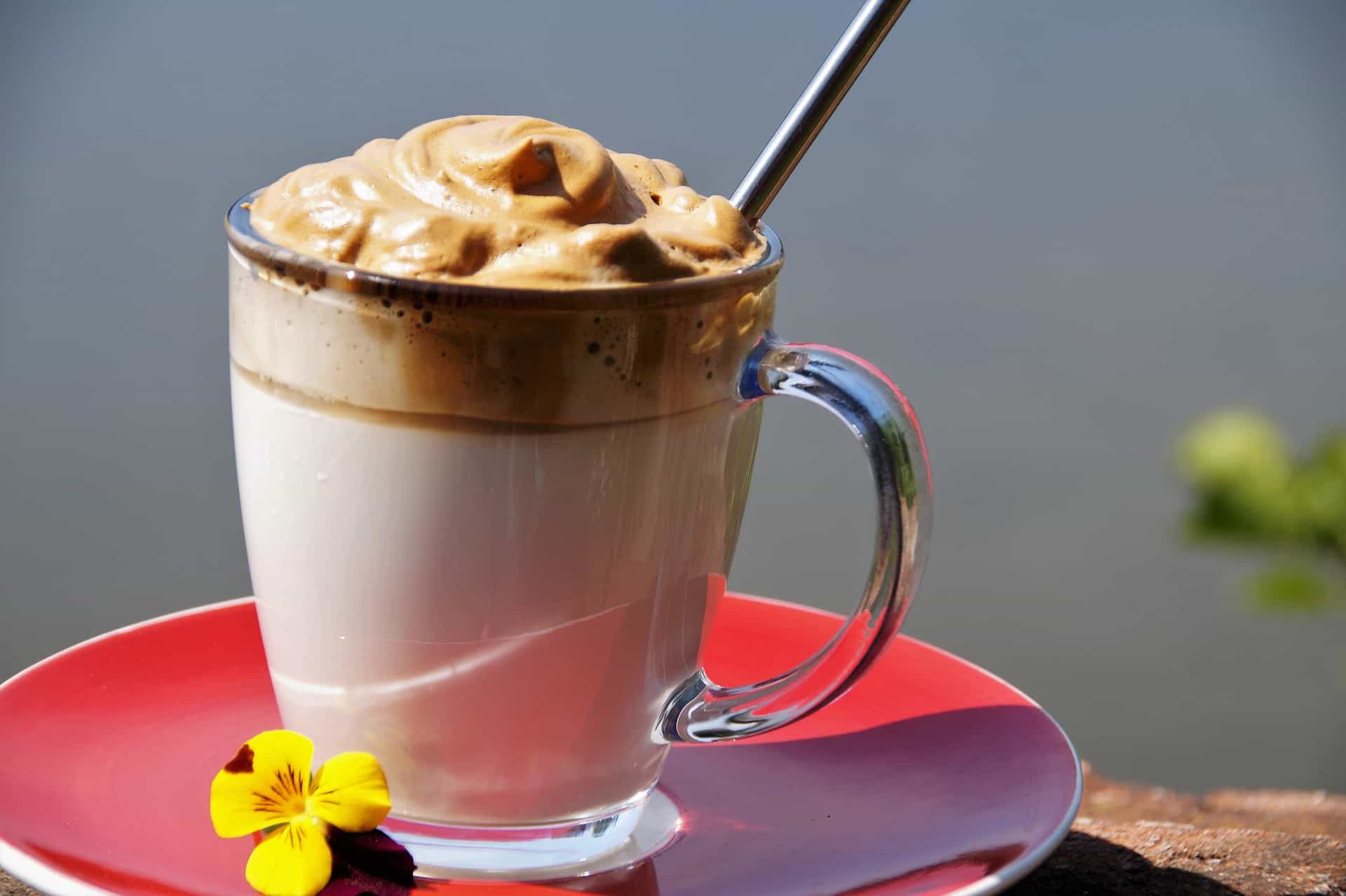 “We think this gained popularity during the pandemic due to people being reluctant to go out to coffee shops and cafes, and beginning to experiment with different drinks from home,” Tom says. “The idea originated from the Korean sweet ‘dalgona’, which has a similar flavour and taste. So in the height of the craze we came up with our iced dalgona coffee, with a twist of chocolate sauce.”

Whipped coffee isn’t the only trend that’s surfaced over the years, though – people have been experimenting with coffee long before the pandemic. Former Sydney barista Tom Saxon tells us that, “In 2015, all of a sudden everyone started ordering bulletproof coffees which are double espresso, a teaspoon of butter and a teaspoon of coconut oil. People would order these first thing in the morning as a boost for the day. The bulletproof phase disappeared as quickly as it came about and after a month or so of this novelty coffee I don’t think I served another one.“ 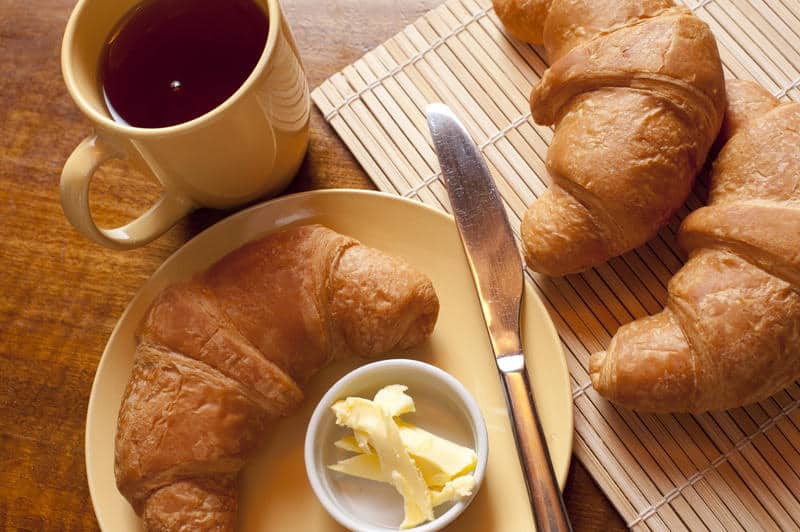 Here at Blue Coffee Box, we prefer to butter our croissants, rather than our coffees.

The term ‘bulletproof coffee’ has been popular online in the UK since at least 2017, though it originally referred to the brand Bulletproof, who have been advocates of the keto diet since at least 2015 and who are credited with starting the buttery coffee trend.

Search interest in bulletproof coffee has been on a downward trend since 2020 – roughly inline with the downward trend in interest for the ‘ketogenic diet’, which advocates a high fat intake and so fits well with the unusual concept of adding butter, coconut oil and all manner of other ingredients to your coffee.

Other ways to drink coffee that didn’t make it into the UK’s most popular picks include:

Whatever your personal preference, if you’re keen to enjoy gourmet coffees from the comfort of your own home, Blue Coffee Box is here to help. Choose from whole bean coffee deliveries or coffee pre-ground to suit whatever equipment you already have at home, with options for light, medium and dark roasts, as well as surprise selections and decaf. We also offer gift subscriptions.

All of our coffee deliveries feature beans that are in the top 2% of all coffee grown on the planet when rated on the SCAA Quality Score.

To find out more about what to expect from a Blue Coffee Box delivery, read our additional information here.